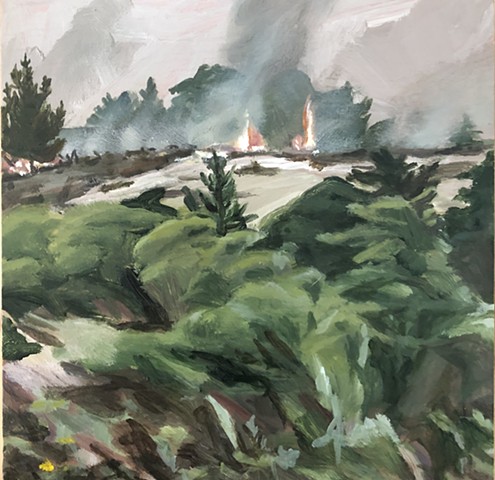 Fire in the Brush
acrylic
8x8 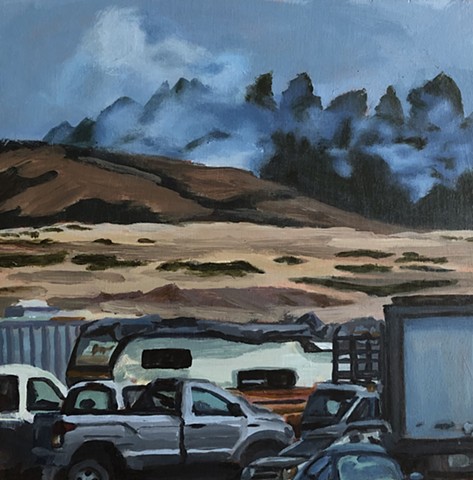 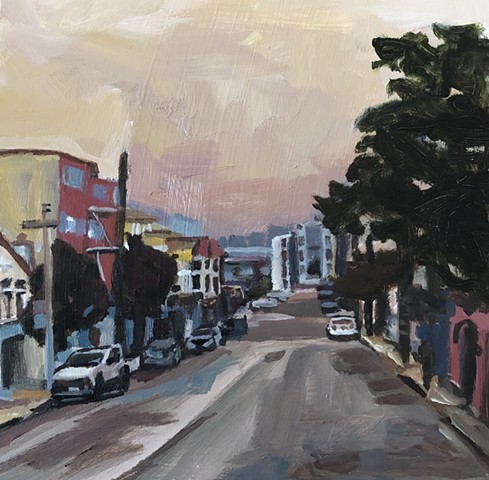 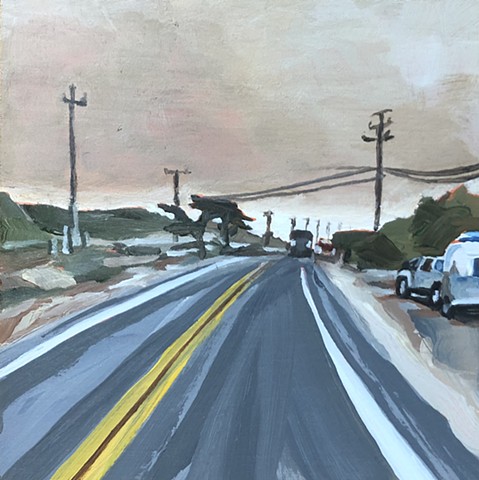 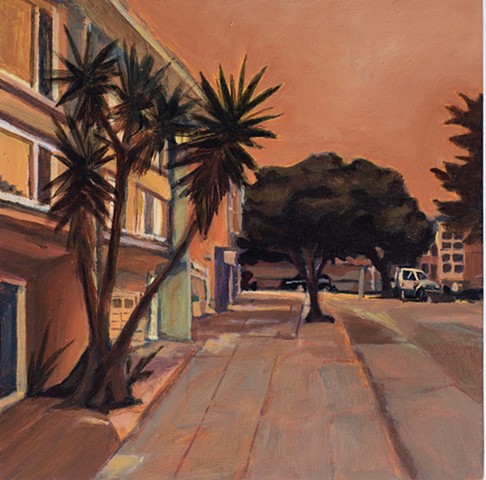 #Endofdays in the Mission
acrylic
8x8 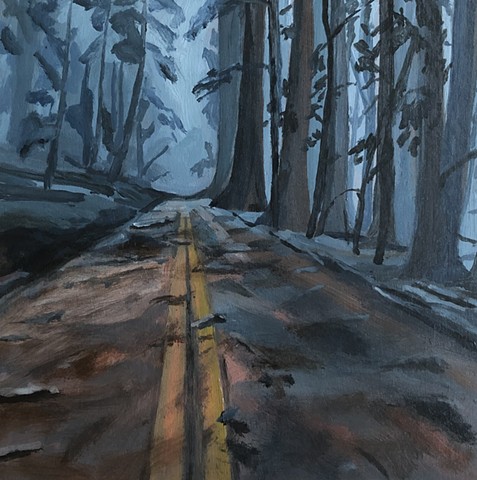 California wildfires are getting hotter, more destructive, and burning longer than ever before. 2020 was the hottest year on record, and saw more acres burned, more houses destroyed, and more people displaced than any year prior.

Yet as bad as the fires are, the smoke is almost worse. It lingers in the air, comes in through gaps in windows and doors, and makes breathing and seeing difficult. It stings the eyes, creates an acrid taste in the mouth, and causes headaches and sore throats. Depending on the toxicity of the materials burned, it can also cause nausea and lung damage as chemicals become air-born and are inhaled. This year, the smoke lingered in the San Francisco bay area for a month as summer temperatures reached their highest levels. Local air quality agencies issued warnings to residents to avoid going outside and curtail all physical activity. Sports games were cancelled, grape harvests ruined, neighborhood runs stopped, dogs went unwalked, and ash piled up on cars and windowsills.

It's hard to express how awful it is to live through the smoke of the fires. The smoke lasts for days and weeks on end with no clear idea of when it will end. The great California outdoors, with its resplendent natural beauty, temperate climate, and healthy air, suddenly disappears, and is replaced by a thick, miserable fog of headaches and eerily filtered light. This year the smoke was so bad that the sky in San Francisco and the rest of the bay area turned a dark, sinister orange. The sun rose, but was only able to achieve a sort of twilight. The contrast between the vibrant blue skies and the sun’s futile attempts at light created a sense of wrongness and deep foreboding.

Based on social media posts of friends and friends of friends in the fall of 2020, this painting series is an attempt to communicate what that experience is like. During this period there were more acres burning simultaneously in California than ever before. My Facebook and Instagram feeds were blowing up, yet friends who lived outside of California had no idea what the experience was like -- and saw almost none of the posts in my feed. The curation and personalization of media through platforms like Facebook and Instagram, means that we are living in less of the same reality. In this series, I wanted to show others what the experience of fires is like.

For those who have lived through the fires and their smoke, the experience is impossible to forget. It touches your psyche, and imprints in your core. The housebound periods have become a dark space in my memory, that are full of memories of lethargy, headaches, and cancelled plans. I no longer enjoy the smell of campfires or food with smoke flavoring. It's just too real and ongoing.

These fires are a direct result of climate change -- and are becoming exponentially worse each year. Unless significant, swift action is taken to reduce fossil fuel consumption, they will continue. Displacing tens of thousands of people, causing breathing problems in millions more, and destroying the quality of life in a place known for the wonder of its outdoors.